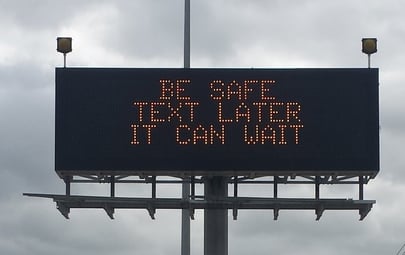 The Center for Disease Control and Prevention (CDC) reports that over 32,000 people are killed and more than 2 million are injured every year from motor vehicle crashes. That works out to roughly 90 deaths each day across the United States - with one third involving drunk driving and almost another third involving speeding. In order to combat such a staggering number of transportation-related casualties, federal and state “Vision Zero” (known in the U.S. as 'Towards Zero Deaths') initiatives are being rolled out to achieve a future where there are no fatalities or serious injuries in road traffic.

What is Vision Zero?

Vision Zero is based on four principles:

At its core Vision Zero believes that, because traffic fatalities and injuries are preventable, no loss of life is acceptable. This approach does take into account that, by nature, humans will make mistakes, but believe the transportation system should be designed holistically to ensure that these mistakes don’t lead to loss of life.

The Introduction of ‘Nudging’

To realize and understand the widespread need for a Vision Zero approach is one thing, but to actually begin implementing these changes in real-life roadway scenarios is another. Nudging, a behavioral science concept, plays a primary role in influencing decision making and encouraging users to modify their behaviors. Through the use of positive reinforcement and indirect suggestions, nudging techniques can uncover traffic solutions to create a sustainably safer driving environment - more effectively than direct instruction or enforcement.

You’ve probably seen an example of this ‘nudging’ without even realizing it. A more obvious example is the use of radar speed signs to instantaneously compares a driver’s speed to the posted limit for that area. In a slightly more subtle approach, average speed displays alert drivers who covered the distance between point A to point B too quickly. In an attempt to dive even deeper into the subconscious, some road construction sites have been using a series of Blank-Out-Signs that show a smiley face progressing from sad to happy as the driver approaches the end of the construction zone. This ‘nudging’ technique helps keep drivers focused and mitigates their frustration over decreased speeds.

In 2006, Chicago’s Department of Transportation successfully decreased crashes at a notoriously dangerous curve by implementing an ‘illusion’ that used progressively-closer, painted white lines to simulate the perception of shrinking distance. Drivers visually interpreted this to mean that they were going faster than they actually were, causing them to slow down before approaching the dangerous hot-spot. In a more recent study conducted by University of Michigan psychological scientist Luca Cian, it was discovered that alerting road signs to display more dynamic, motion-focused visuals (i.e. a pedestrian running instead of walking) lead to quicker reaction times and increased caution. 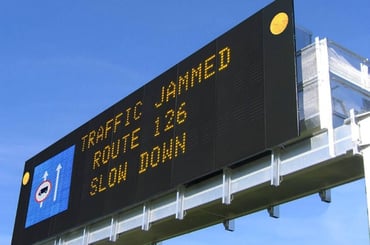 As psychologists and transportation professionals continue to find innovative tactics to support a “Vision Zero” future, it is critical to consider how Dynamic Message Signs (DMS) can be leveraged. The rise of DMS usage across the nation directly reflects motorist desires to access even more transportation information than before, and the importance this information plays on the effectiveness of Intelligent Transportation Systems (ITS). In fact, over 90% of all freeway agencies reported that they use DMS to share important traveler information in the USDOT’s 2013 Deployment Survey.

While the traditional purpose of a DMS sign is to showcase route changes, speed reductions, lane closures, and the like, many federal, state, and local transportation agencies are looking to implement messages designed to change driver behavior and reduce transportation-related casualties. The USDOT Federal Highway Administration conducted a survey on the “Effectiveness of Safety and Public Service Announcement Messages on Dynamic Message Signs,” which sought out to provide a greater understanding of the influences these messages have on roadway users.

Through their research, the Federal Highway Administration discovered the following key insights:

Respondents felt that traffic safety messages were most effective when viewed on a DMS as opposed to other media outlets such as television.

A key part of this study focused on how to best frame the content for greatest impact; the most effective messages used more assertive language (i.e. monetary fines, number of deaths, etc.)

Respondents under 30 were least likely to consider the messages effective, indicating a need for awareness promotion

In order to make a notable influence on behavior, DMS messages must be considered useful and effective

“Vision Zero” may seem like a pipe-dream at first glance, but it has taken roots in not only the United States, but across the globe. Many states and cities have rolled out new policies and initiatives that balance the need for mobility with the greater goal of eliminating loss of life and serious injury due to roadway accidents. By systematically creating safer driving behavior, society will also see benefits such as decreased repair expenses, car insurance, and even health care costs.

At the end of the day, we are all humans and we make mistakes. Together, the transportation community and drivers can create a future where our Intelligent Transportation Systems protect us during each and every mile of our journey.

Interested in learning more about local Vision Zero projects? Check out some of our favorite sites: