In 2009, Syracuse University added a stunning, 75,000-square-foot addition to its S.I. Newhouse School of Public Communication, utilizing its capital campaign and through the generosity of its donors and alumni.

In order to acknowledge and honor those donors, the university wanted to incorporate some type of donor recognition, and turned to the legendary design team of Poulin + Morris to create something spectacular. Poulin + Morris is an award-winning, internationally recognized, multidisciplinary design consultancy, based in New York, with projects all over the world.

“The dean approached us after hearing of our work with other educational institutions,” said Richard Poulin, principal at Poulin + Morris. “The addition to the school would allow a whole new approach to how the public communications world is being influenced by the digital realm.”

The new building is glass-wrapped and houses community spaces, high-tech media labs and research centers. It’s an open space designed to include different communications disciplines, such as media studies, journalism and graphic design.

Poulin and his team designed a special, digital LED display, manufactured by Sunrise Systems, in Pembroke, MA, that incorporated choreographed sequencing to engage and include each donor, with over 100 staggered LED panels across the main wall.

“We branded the building with such a unique display,” Poulin said. “In addition to donor names, people were actually able to say something about their experience at Newhouse. (The university) loved that this was part of the newly defined mission for them, and it set them apart from other institutions.”

The display, on which names and quotes scroll in a continuous, synchronized pace across each individual panel, from right to left, is part of a large atrium that also serves as an event space. The wall can go blank, according to Poulin, and be programmed specific to an event or entity that the school is supporting at any given time. “We couldn’t have done this without Syracuse University’s IT department,” he added. “It all happened due to us getting IT involved early on.” 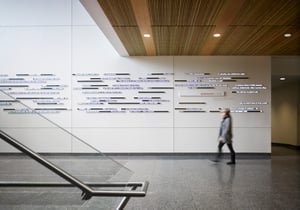 The project, which is located in the building entrance lobby, earned an SEGD Design Honor Award. The partnership of the design team at Poulin + Morris, project management from Ennead Architects and manufacturing by Sunrise Systems all came together to produce a creative and unusual display that defines the “heart” of the S. I. Newhouse School.

Poulin said there was no question in choosing Sunrise Systems as the manufacturer for this incredible display. “We’ve worked with Sunrise over the years and have always had a good relationship. They’re always at the top of the list when it comes to who we should call for a project.”

We'd love to hear from you!